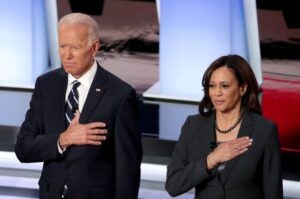 Dear Friends,
Recently we have seen many amateur astrologers doing
birth chart readings for Joe Biden and Kamala Harris.
We were not impressed with these readings.  So we asked Pundit Shastri if he would
do a short summary reading for Joe and Kamala.

We have also drawn up their birth charts.
Hope you enjoy some insights into our newly elected President and Vice-President

He was born in Vrishchik (Scorpio) Lagna (Ascendant)

In the Kendra he has Surya (Sun), Ketu, Shani (Saturn), Shukra (Venus) and Rahu. This is one kind of Kamal Yoga. Chandra (Moon) from Guru (Jupiter) are in the 4th house; this is Gaj Keshari Yoga.  These are two positive Yogas. Plus Guru (Jupiter) is exalted in birth chart in Ninth House and exalted (Vargottam) in Navamsha: this is a very good Raja Yoga. Raja Yoga (Yoga for a great leader) He is in Jupiter Mahadasha now.

In beginning part of his life: there were many problems in his personal life and political life. After 22nd March 1985 big changes took place in his political life and day-by-day things got better and better. Now he is passing through Guru (Jupiter), Rahu and Shani (Saturn) period.

From 1st Jan 2021 some obstacles come but none that can harm him. He is a very honest person and cares deeply for his country. During his administration the country will grow very fast regarding wealth, scientific research, national (home) security, welfare of children, but he should always be careful from radical people because many radical people can get close to him then after create big problems for him and USA. Under the leadership of Joe Biden the USA will get support from nature to have better relations with other countries. Import and export business/trade grow very fast.

When Shani (Saturn) Mahadasha will begin September 21st, 2022 at that time:

He should have several times per year Shani (Saturn) Yagya and Mahamrityuanjaya yagya for perfect health.

She was born in Mesh (Aries) Lagna (Ascendant)

Lagna Lord Mangal (Mars) and Lord of 4th house Chandra (Moon) are in the 1st House this is a very good Raja Yoga. This is good for being a strong leader.

Her natal moon is in Ashwini Nakshatra (constellation).

When she was a child her mother and father had big problems. She also had big problems, more ups and downs, until 6th March 1990. After that everything has been going very well.

Both Joe Biden and Kamala Harris have Lagnas (Ascendants) ruled by Lord Mangal (Mars) so they are very compatible, strong and supportive to each other. Both have the same motivation/intentions to develop a country.

Thank you very much