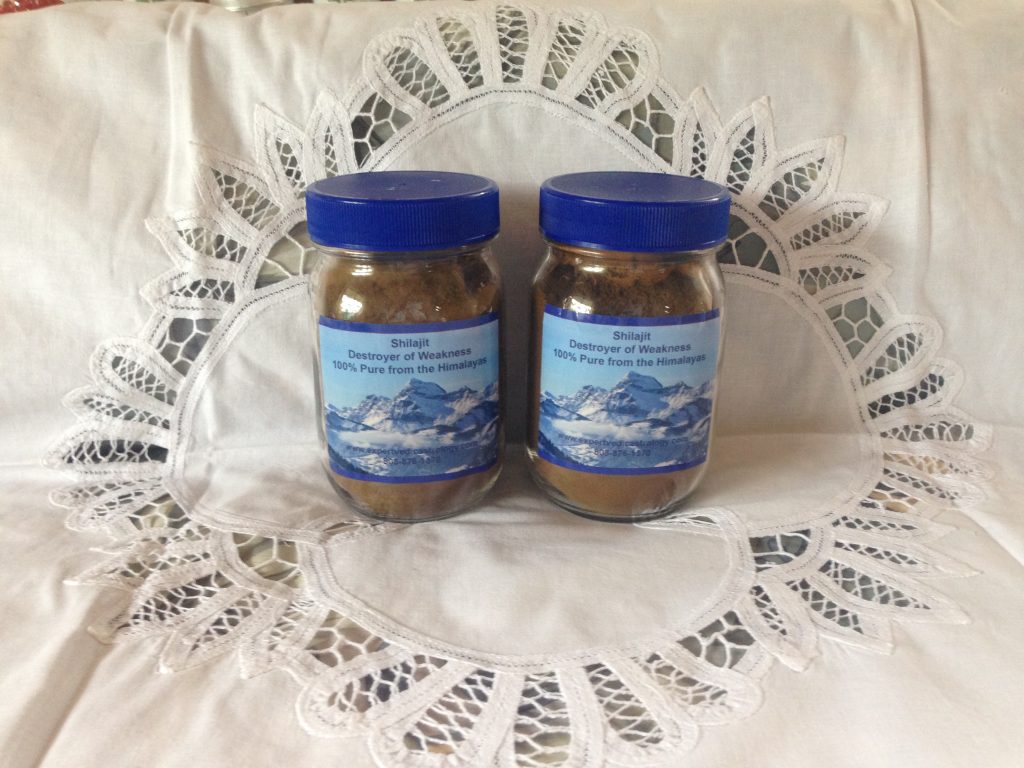 One of the goals of Enlightened Living Enterprises is to provide high quality enlightened products for all people who are on a spiritual path towards enlightenment.  We want everyone who has spiritual aspirations to gain all the support they can get on this wondrous journey.

We would like to introduce to you the first new products of our Herbal Product Line.  We thought it would be most appropriate to begin our release of Herbal Products with what is considered by many to be the most important herbal remedy in Ayurveda.  It is called “Shilajit” (the destroyer of weakness).

This is a quote about our Shilajit from someone who has tried shilajit from other suppliers:

“This stuff is so pure, I think you could charge more for it. Or at least sell it as AAA “super fine” quality. Typically, shilajit has sand and other impurities that settle to the bottom when you dissolve it in warm water. That’s why I never swallow a capsule. I open the capsules and make a tea with warm water. But this new shipment completely dissolves, with no residue at the bottom. As a result, I’d say there is 10% to 15% more shilajit per unit weight.”

Hello         I am really enjoying the Shalijit and can feel that my body likes and is benefiting from it.   Thank you for producing and distributing such an excellent product.

Hola Ken             My order arrived yesterday so many thanks for your promptness.    I had been without Shilajit for several weeks so it feels good to have it back in my system.       It’s such an excellent product!

We are selling this 100% Shilajit

We will be introducing more and more herbal products especially suited for spiritual aspirants as the months roll by and we wish you all success and fulfillment in whatever path of God Realization and perfect health that you have chosen.  Just a note that we are unable to take “returns” because we cannot re-sell after they have gone out.  Please call us if you have any concerns.

Following is a note sent to us by someone who has been taking Shilajit:

“By the way, I had stopped using the Shilajit for a week or so…and began to notice less energy.  Started again just before the new jars arrived and I really do notice the difference again.  Alertness, energy, happy to engage the day.  Amazing stuff!”

The capsules arrived today and are now waiting for my students to pick them up next week when they come to class.   Feels so good to be sharing such an excellent product with others.!

Shilajit The Destroyer of Weakness

Indian shilajit is a mineral found in rocks in the Himalayan Mountains. It is actually decomposed plant matter that has been integrated with rock and drips from the rocks during hot weather due to geothermal pressure.

This amazing mineral substance is collected in the form of a thick paste and purified for medicinal use. In traditional Indian medicine (Ayurveda), shilajit is known as a hot bitter. It is used to boost energy caused by stress and anxiety, to renew sexual and spiritual vitality and as an overall tonic.

Minerals, which can only be obtained through the diet, are vital to human health. Unfortunately, much of the soil in which modern foods are grown is depleted of minerals. As a result, modern diets often do not provide enough of the minerals required for optimal health. The body requires more than eighty different minerals, and most people simply do not obtain these minerals in adequate amounts from food.

The health benefits of Indian Shilajit are attributed to its high mineral content.

It provides beneficial herbs to the tissues of the body, and it is also able to latch on to toxins and remove them from the system.

In addition to its general ability to increase strength and energy, Indian Shilajit is said to facilitate brain function, help bones to heal, tone the kidneys and immune system and help to reduce the pain of arthritis.

Further, the minerals in Indian Shilajit may help to lower blood pressure, aid weight loss, and prevent a range of other illnesses.

Indian Shilajit is not only an excellent source of a variety of minerals and elements, but it also appears to have unique properties that are not found in any other kind of supplement. According to Indian folklore, shilajit can make the body as “strong as a rock.”

In Ayurvedic tradition, Indian Shilajit is used as a remedy for almost any illness or condition that can affect the human body. It is said to enhance the benefits of other herbal remedies as well.

Among the more common diseases that Ayurvedic physicians would treat with Indian Shilajit are diabetes, digestive disorders, obesity, sexual inadequacy and chronic fatigue. It has the ability to enhance the positive effects of other herbal remedies.

Indian Shilajit is available in capsule and powder form. Shilajit contains fulvic acid and humic acid, the organic compounds present in soil that are considered to provide the benefits for which shilajit is touted.

These acids contain high concentrations of minerals like calcium, magnesium and iron.

Shilajit in Sanskrit means “destroyer of weakness”.  It is considered by many to be the most important natural remedy of Ayurvedic medicine.

Ancient Sanskrit texts, over 3,000 years old, make reference to a mysterious substance called Shilajit, which they describe as the “destroyer of weakness”.  The texts list its powerful health and spiritual benefits and the positive changes that Shilajit brought in the lives of those who used it.  This sacred substance was prescribed for thousands of years for many different health problems and became a powerful tool in Ayurvedic medicine.

Shilajit also known as Mineral Pitch is a 100% natural organic extraction from a 75 million year old earthly deposit in the Himalayas.  Shilajit comes from the rocks high in the Himalayas (14,000 ft and above) and contains approximately 70 essential complex and dissolved minerals and trace elements.

Shilajit is balancing for all three doshas: Vata, Pitta and Kapha.  It purifies the blood and helps remove excess kapha and toxins from the tissues.  It increases vitality and stamina while toning the reproductive organs and supporting their proper function.   Shilajit is a powerful rejuvenative that cleanses the urinary tract and lungs, while bolstering immunity and strength.

Fulvic Acids greatly enhance the bioavailability of important trace minerals.  They modify the damage from toxic compounds such as heavy metals and free radicals.

Fulvic acid enhances the availability of nutrients and makes them more readily absorbable.  It allows minerals to regenerate and prolong the residence time of essential nutrients in the body.

As the most powerful, natural electrolyte known, fulvic acid restores electrical balance to damaged cells, neutralizes toxins and can eliminate food poisoning within minutes.  When it encounters free radicals with unpaired positive or negative electrons, it supplies an equal and opposite charge to neutralize the free radical.  Fulvic acid has the ability to detoxify herbicides, pesticides, and other poisons that it interacts with – this includes many radioactive elements.

These plant deposits came from the dense tropical jungle of millions of years ago and have never been exposed to any chemicals, fertilizers or pesticides. They were produced long before any environmental pollution or genetic manipulation happened on the earth.  It brings to us minerals that are not available today.

There is a lot of research proving Shilajit can help a broad spectrum of health problems.  There are many testimonials from people taking Shilajit that have received improvements beyond their expectations.
These testimonials indicate that Shilajit has to be taken for at least 2 months to give it time to work.

We have been taking this Shilajit for two months now and we have noticed an increase in energy and clarity of mind.  “We have noticed more muscle tone and less fat.  We are sleeping more deeply and feel more rejuvenated upon waking.  Our digestion and elimination is more efficient and we feel a toning of our internal organs. We also notice deeper experiences in meditation.”

This Shilajit is harvested by repelling down cliffs during the proper time of the moon cycle and the harvesters recite appropriate mantras throughout its gathering and cleaning stages.

The foods we eat today are void of many essential nutrients.  According to a US Senate study (Doc#264), 99% of all Americans are deficient in minerals and trace elements.  Dr. Joel Wallach states, “Almost all of the degenerative diseases that we know today are directly or indirectly related to mineral deficiencies.

Our Shilajit is heavily tested, (to use for pharmaceutical grading)

Each batch of our Shilajit is tested rigorously….

Each batch must be less than 10 ppm….(=parts per million which is barely detectable)…which means it passes USP….

Many non- pharmaceutical quality grades that are out there, especially if of Chinese origin, heavy metals are an issue…and there’s quite a bit of it on the market….ours is from INDIA and rigorously tested.

Our Shilajit is also a Concentrate Extract 6x.  Our Shilajit is triple purified/washed the best quality I know of… Further clarification from the ASSAY SHEET:

The Story Behind Shilajit

During the transition the mineral rich and fertile soil of the seabed gave rise to a lush and dense tropical jungle.  As the ground continued to be pushed up to become mountains a lot of the plants became trapped by layers of rock and soil and remained preserved for millions of years.  These plants had never been exposed to chemicals, fertilizers or pesticides.  They are gradually transformed into Humus, a rich organic mass that is food for new plant life.  Due to microbial action and the tremendous pressure from the weight of the mountains the Humus was transformed into a dense, viscous, mineral rich mass.

The discovery is said to have been made by the Himalayan villagers observing the large white monkeys migrate to the mountains in the warm summer months.  The monkeys were seen to be chewing a semi-soft substance that flowed from between layers of rock.  The villagers attributed the monkey’s great strength and longevity to the substance.  They began to consume it themselves and reported a broad spectrum of health improvements.  It seemed to give them more energy, relieve digestive problems, increase sex drive, improve memory and cognition, improve diabetes, reduce allergies, improve their quality of life and it seemed to cure many diseases.

The trapped layers of Shilajit become exposed due to the freezing winters, hot summer sun and erosion from monsoon rains.  Shilajit will “flow” out from between the cracks in the layers of rock during the summer when the temperature of the mountains gets warm enough and the Shilajit becomes less viscous.

Having tonic properties, this substance is useful in a wide variety of treatments.  It has been said that there is hardly any curable disease which cannot be assisted with the aid of Shilajit.  General debility and fatigue is among the list of ailments which can be helped with Shilajit.  The overall action is alterative, tonic, slightly laxative, cholagogue, respiratory stimulant, disinfectant and expectorant, intestinal antiseptic, diuretic, and lithotriptic.

Your cart is empty